GraphQL – An untamed monster in the web development world

Since its release by Facebook in 2015, the name GraphQL has been frequently mentioned by the developer community when building APIs. So, what is GraphQL? How powerful is it that it attracts so much attention? Let’s learn about it through the following article.

This article is divided into two parts: in the first part, we will learn what GraphQL is, its features, and its advantages and disadvantages; in the second part, we will dive into building a simple GraphQL server on the NodeJS and Express platform.

GraphQL is a query language for APIs and a runtime for fulfilling those queries with your existing data. GraphQL provides a complete and understandable description of the data in your API, gives clients the power to ask for exactly what they need and nothing more, makes it easier to evolve APIs over time, and enables powerful developer tools.

GraphQL was developed internally by Facebook in 2012 before going public in 2015.

In simple phrases, “field” is the element of an object that we want to get from the server when performing operations such as querying, etc. In the above example, the corresponding fields are id, name, and category.

We have given our query a name GetAllBooks which is quite descriptive. Queries can also contain comments. Each line of comment must start with the # sign.

Fields are basically parts of an object we want to retrieve from a server. In the query above, id, name, category is a field on the getAllBooks object.

In addition to arguments, a query can also have variables to manipulate the data in a more concise way. Variables can be declared after the query or mutation and passed as arguments to a function, starting with $.

Variables can also have default values:

Like argument, variables can be required or optional. For required variables, an exclamation mark (!) must be added when defining the variable (including in the schema map).

Aliases are created to help the client request data from the same field with different parameters in the same request.

In the above example, the two book properties will conflict and it will not be possible to fetch the information by id without using Aliases to name them.

Fragments are reusable set of fields that can be included in queries as needed. Assuming we need to fetch a bookDetail  field on the book object, we can easily do that with:

The components of a fragment include:

Directives allow us to change the structure of a query flexibly using variables. GraphQL has two directives:

In GraphQL, adding or modifying data with the server is done through mutations. It corresponds to POST, PUT, and DELETE actions in REST APIs.

The example below is the mutation syntax that allows us to add a new Book record to the database with the function name createBook.

We send data as a payload in a mutation. For our example mutation, we could send the following data as payload. And we’ll get the following response after the update has been made on the server:

One of the important requirements for building and developing any product is real-time connectivity, to be able to connect to the server to get information about events immediately. In this case, GraphQL provides concepts called subscriptions.

When a client subscribes to an event, it begins to create and maintain connections to the server. Whenever that event occurs, the server listens and sends back information to the client. Unlike Queries and Mutations, which follow a “request-response-cycle,” Subscriptions represent a stream of data sent to the client.

Subscriptions are written using the same syntax as Queries and Mutations. The following example is the result of successfully subscribing to the addBook event.

After the client sends a subscription to the server, a connection is opened between them. Then, whenever a bookCreated mutation is created, the server will send information about that user to the client.

GraphQL Client is developed to not only optimize the features of GraphQL but also add many new modules to help clients have more options for their projects. Some prominent utilities that many GraphQL clients have developed include:

The popular GraphQL clients are being widely used to support many different platforms such as Apollo Client, Relay,..

Every time the server receives a request, the process will take place as follows:

In part 2, I will guide you through building a GraphQL API Server using the Apollo server on the NodeJS and Express platform to better understand the strengths of GraphQL.

Currently, there are many implementations to build a graphql server such as Apollo GraphQL, Hasura, Hot Chocolate… And in this article, I will use Apollo GraphQL to set up. In addition, we also need to install the necessary libraries to create the easiest Graphql Server.

In addition, you can install nodemon to make coding more convenient. After installation is complete, below are all the necessary packages to set up a GraphQL API server using MongoDB. 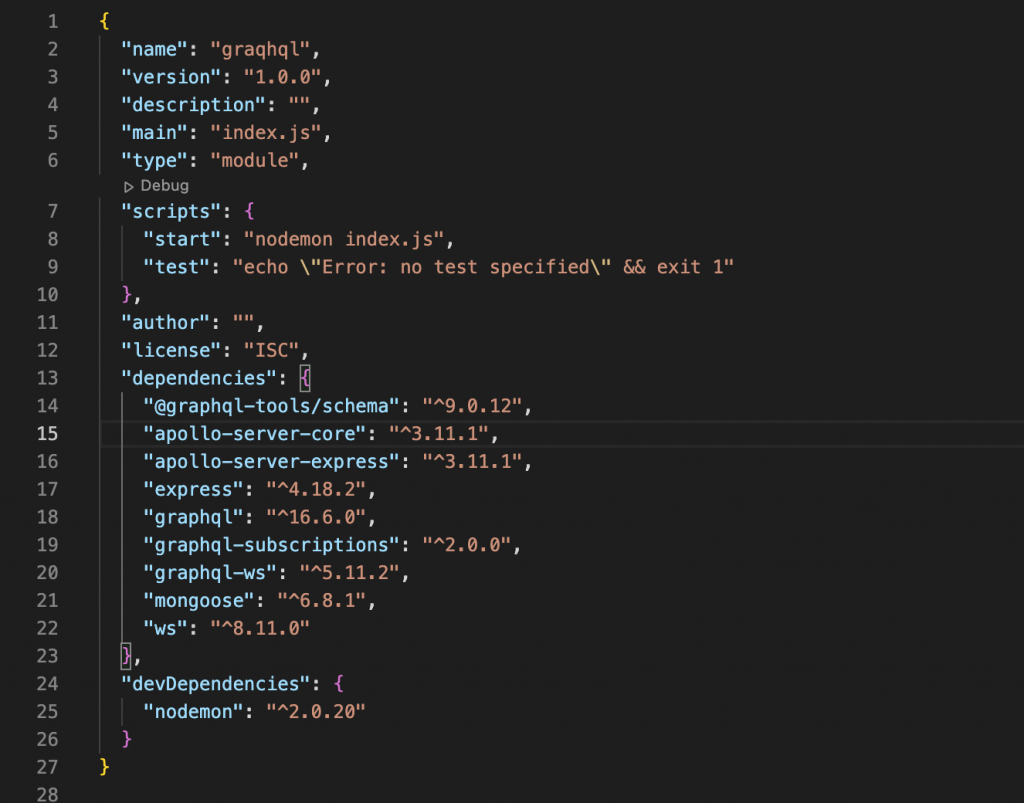 Next, we need to build a folder structure for the application to manage the project more easily. Here is the structure I have built for you to refer to: 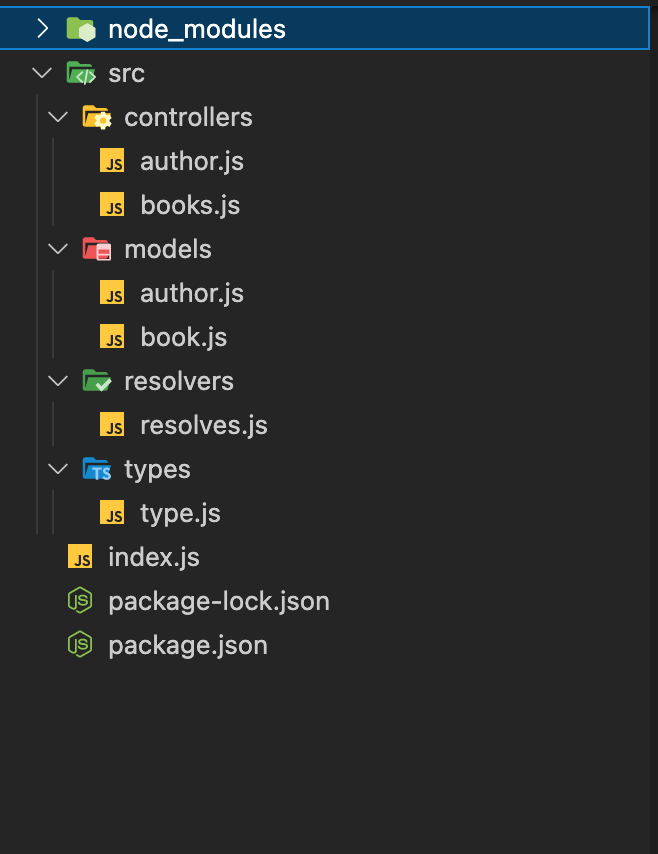 First, we need to build a function to start the server. Here are all the configurations for initializing ApolloServer v3 and connecting to MongoDB.

For detailed instructions, you can refer to this link to set it up as easily as possible. 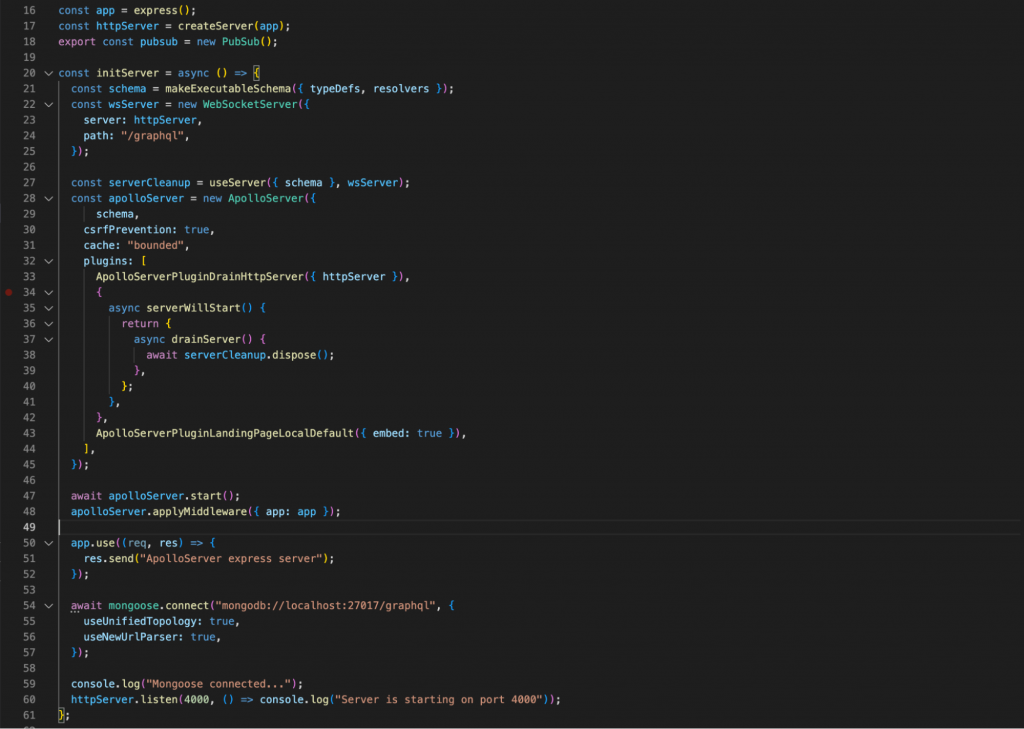 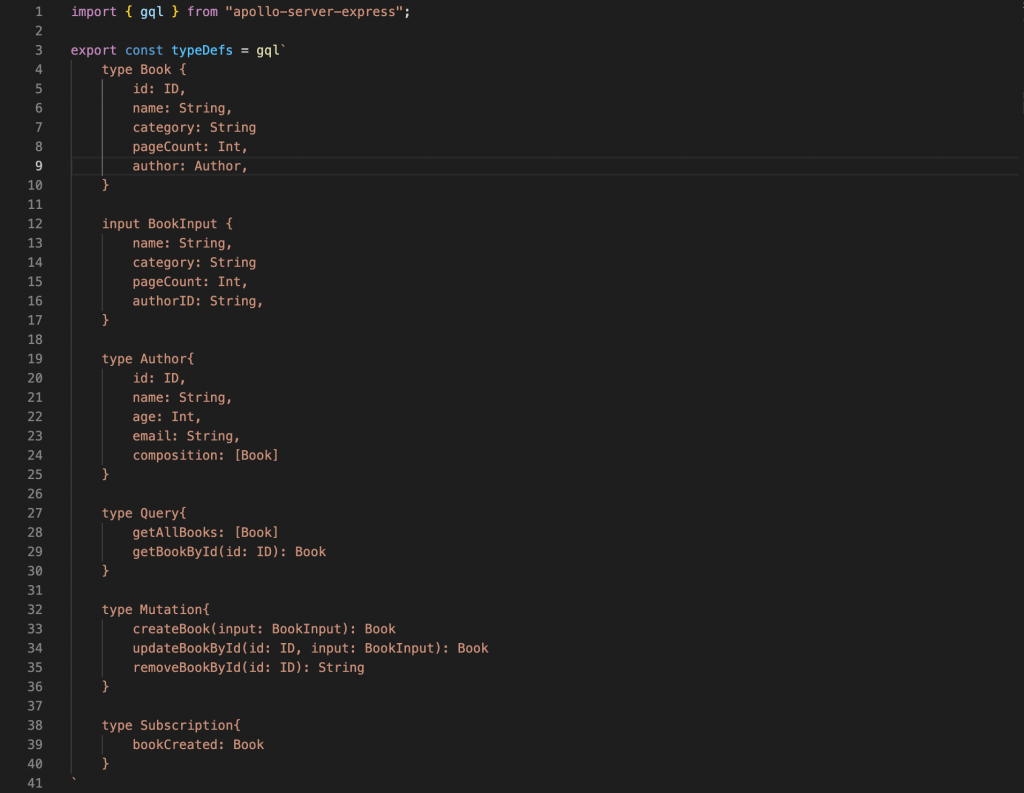 The field and data type for Author and Book

In order for the Graphql Server to accurately send the data that the client requests, in addition to defining the schema, it is important to define resolvers. This means that the server describes the behavior of listening and performing queries on the database to retrieve information and return it to the client. In this example, we define functions to handle queries, mutations, and subscriptions 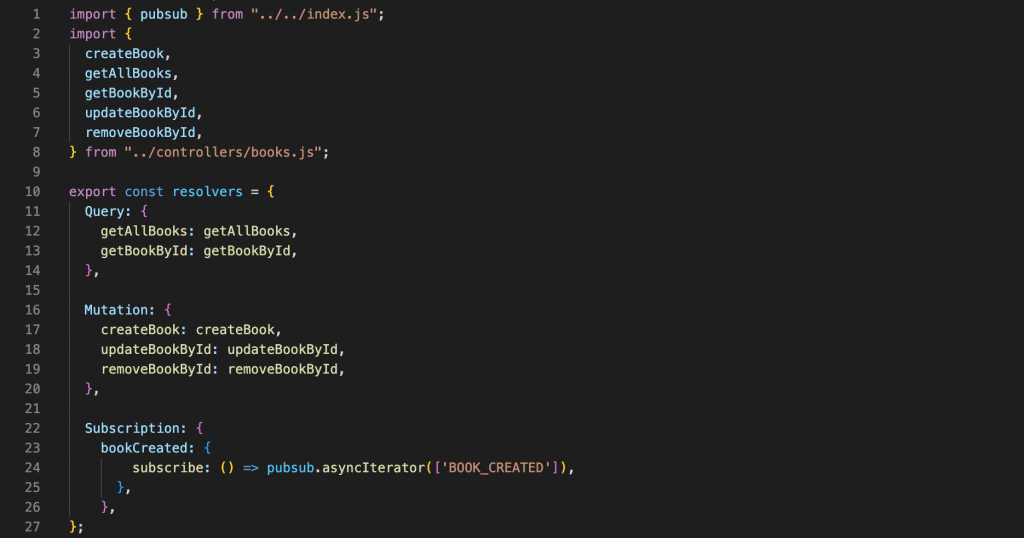 The getAllBooks and getBookById functions return data when the user manipulates the query. 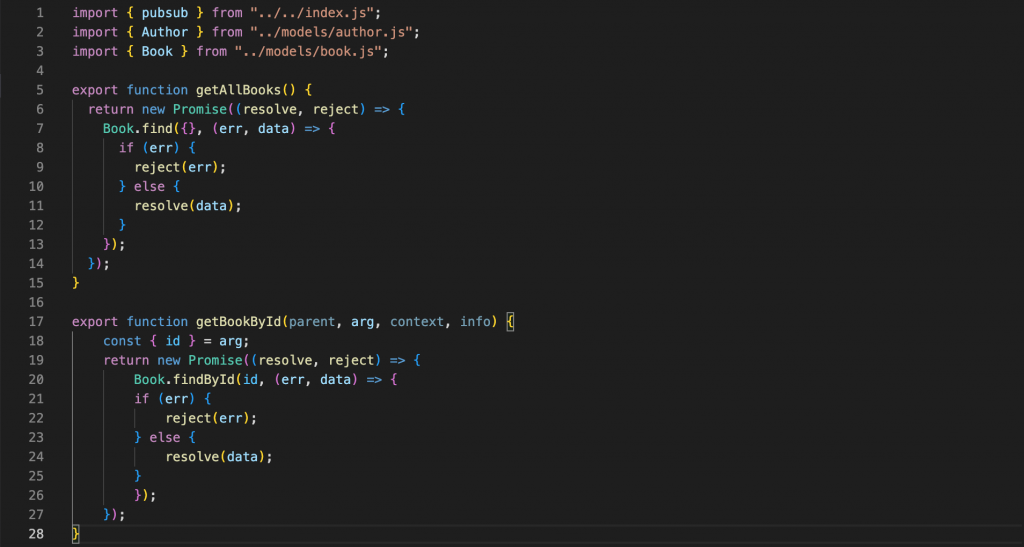 The createBook, updateBookById, and removeBook functions handle when the client performs the CREATE, UPDATE, and DELETE actions for the book permissions. And the analogy for the object is Author. 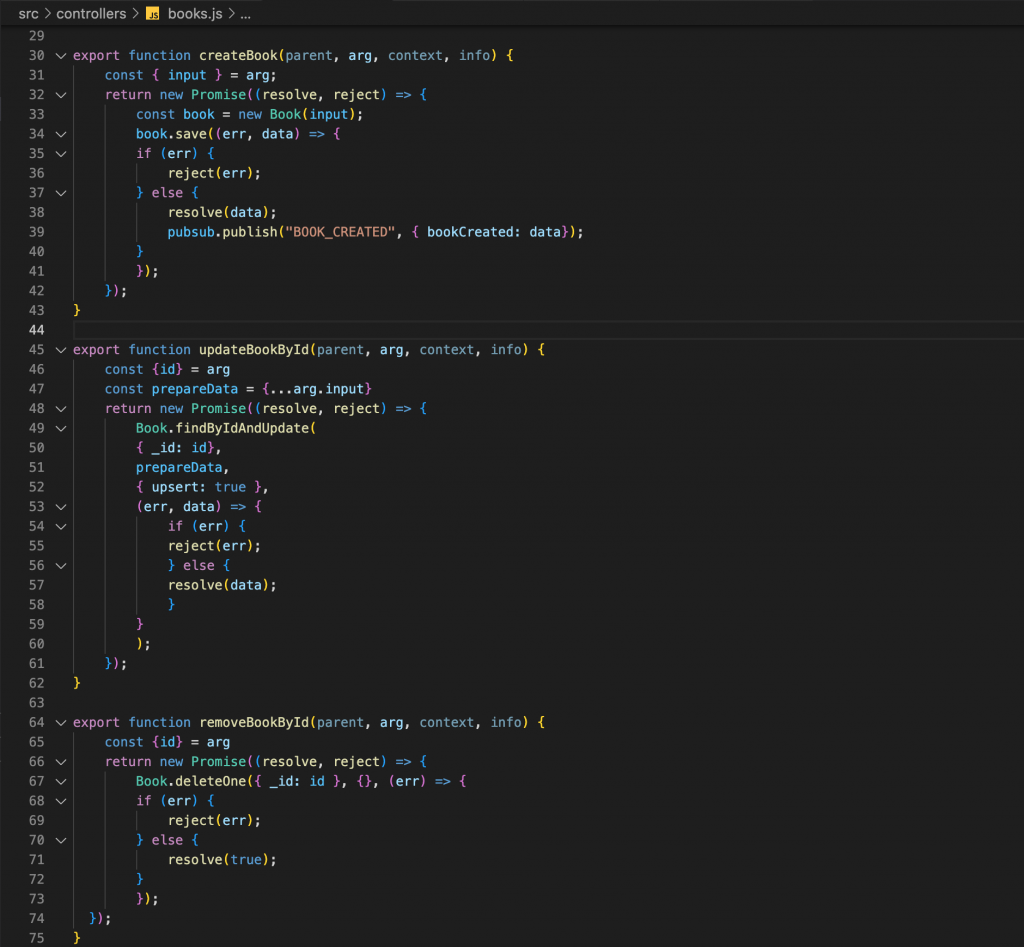 Just now is the whole process to build a GraphQL server using Apollo Server. Here we test together to see the results.

On the client side, for quick and convenient operation, I will use the apollographql sandbox studio to interact with data through the server we just set up above. First, with the query feature

In the example above, through the query operation, we were able to get all the information about the books along with the corresponding author information. The result also clearly shows the prominent feature of GraphQL, which is that it only retrieves the information that the client requests.

With the knowledge in part 1, we’ve already known that the mutation feature allows the client to write data to the server to perform actions like (CREATE, UPDATE, and DELETE)

In this example, we add 1 record containing Author information to the server.

In addition to passing variables like in the example, you can use arguments to directly assign data

In this example, I use a subscription to create a connection that listens for signals when the client adds a new record to the server.

In the Subscription resolver, there should be a function to subscribe with the message ‘BOOK_CREATED’

In addition, in the addBook function, when adding a record to the database successfully, we also need to configure a signal for the subscription to listen for the event that has been sent.

And finally, let’s take a look at the results through the graphqlserver sandbox. Here I am in two tabs to observe when performing the insert book mutation into the database, the subscription also immediately sends out the previously subscribed event information.

This is the end of the steps to build a GraphQL server using Node.js and Express. It is quite simple, isn’t it?

Good luck to everyone.